View source
watch 01:36
We're Getting Mutants in the MCU - The Loop
Do you like this video?
Play Sound

"You're a good steward, Doughty. You cook. And you swim."
―Horatio Hornblower to Doughty[src]

James Doughty was captain's steward aboard the HMS Hotspur.

In the TV series

Because of this, Styles resented Doughty, and this resentment only grew over time, finally coming to a boiling point as the Hotspur was quarantined to prevent talk of Elizabeth Patterson Bonaparte- and Jérôme-Napoléon Bonaparte coming out. Styles blamed their bad luck on Doughty, Doughty insulted Styles, and a fight broke out. When Midshipman Orrock tried to break up the fight, Doughty struck out at him.

Doughty was supposed to hang for this, but Hornblower allowed him to escape to the American ship Liberty. 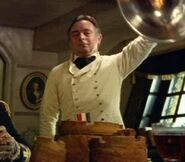