Horatio Hornblower was an officer in the Royal Navy during the Napoleonic Wars. Clever, but unhappy for most of his life, he found fame and fortune as a hero of the Navy.

Hornblower, the son of a doctor, was born on July 4 1776 (the date of the adoption of the United States Declaration of Independence) in Hythe, Kent. He was given a classical education, and by the time he joined the Royal Navy at age seventeen, he was well-versed in Greek and Latin. He was tutored in French by a penniless French émigré and had an aptitude for mathematics, which served him well as a navigator.

Hornblower's early exploits were many and varied. Joining the Royal Navy as a midshipman, he fended off fire ships which interrupted his first (disastrous) examination for promotion to lieutenant. Still only an acting lieutenant, he was given command of the sloop Le Rêve, which blundered into a Spanish fleet in the fog, resulting in Hornblower's capture and imprisonment in Ferrol. He was finally confirmed as a commissioned lieutenant while still a prisoner of war. His daring rescue of some sailors from a shipwreck, and his honourable adherence to the parole he had given, was rewarded by his Spanish captors by his release. His captivity left him with a fluent knowledge of Spanish, which proved highly useful in several further adventures.

As a junior lieutenant, he served under Captain James Sawyer, who suffered from paranoid schizophrenia on a trip to the Caribbean, during which he began his long friendship with William Bush. Returning to England Hornblower was demobilised during the Peace of Amiens, causing him great financial distress -- he resorted to making a living as a professional gambler. He was employed for the Long Rooms, playing whist for a modest income. During this time, Hornblower took up residence in Portsmouth, in Mrs. Mason's boarding house.

In 1803, he was reactivated and given command of a sloop of war. Mrs. Mason's daughter, was incredibly distraught at this development. Out of pity, Hornblower proposed marriage. Maria happily accepted. He had been confirmed as Commander of HMS Hotspur when hostilities resumed against Napoleon. After gruelling service during the Blockade of Brest, he finally was promoted to captain and recalled to England. Once there, he met the secretary of the Admiralty and post rank is conferred immediately when Hornblower agreed to take part in a clandestine operation that eventually lead to the resounding English victory at the Battle of Trafalgar that cost Horatio Nelson his life.

Hornblower then organised Nelson's funeral procession along the River Thames and had to deal with the near-sinking of the barge conveying the hero's coffin. Later, he secretly recovered sunken gold and silver from a sunken ship on the bottom of Marmorice Bay within the Ottoman Empire with the aid of pearl divers from Ceylon, narrowly escaping a Turkish warship at the end. Upon unloading the treasure and refitting, his ship was taken away from him to be given to the King of the Two Sicilies for diplomatic reasons. On his return to England, he found his two young children dying of smallpox.

He later made a long, difficult voyage in command of the frigate HMS Lydia, round the Horn to the Pacific, where he supported a madman, El Supremo, in his rebellion against the Spanish. He captured the Natividad, a much more powerful Spanish ship of the line, then had to reluctantly cede it to El Supremo to placate him. When he found that the Spanish had switched sides in the interim, he was forced to find and sink the ship he had captured. On his return voyage, he and his well-connected passenger, Lady Barbara Wellesley, the younger sister of Arthur Wellesley (later to become the Duke of Wellington) became dangerously attracted to each other.

After these exploits, he was given command of HMS Sutherland, a seventy four gun ship of the line. While waiting at his Mediterranean rendezvous point for the rest of his squadron - and its commander, Admiral Leighton - to arrive, he carried out a series of raids against the French along the south coast of Spain. He learned that a French squadron of four ships of the line was loose, having slipped the blockade. He decides that his duty required that he fight at four-to-one odds to prevent them from entering a well-protected harbour. In the process, his ship was crippled and, with two-thirds of the crew incapacitated, he surrendered to the French.

He was sent with his coxswain, Brown, and his injured first lieutenant, Bush, to Paris for a show trial and execution. During the journey, Hornblower and his companions escaped, and after a winter sojourn at the chateau of the Comte de Graçay, navigated down the Loire river to the coastal city of Nantes. There, he recaptured a Royal Navy cutter, the Witch of Endor, manned the vessel with a gang of slave labourers and escaped to the Channel Fleet.

He is very smart. Hornblower faced a court-martial for the loss of the Sutherland but was "most honourably acquitted." Among the honours he received was a knighthood. When he arrived home, he discovered that his first wife Maria had died in childbirth and that his infant son, Richard, has been adopted and cared for by Lady Barbara. As she had been widowed by the death of her husband, Hornblower's former commander, Admiral Leighton, they were free (after a decent interval) to marry. Barbara was more beautiful, cleverer and far richer than the poor Maria (whom Hornblower had more pitied than loved). Thereafter, he lived (uncomfortably) as a country squire in Kent.

Freedom from this purgatory came when he was promoted to commodore and sent on a mission to the Baltic Sea, where he was to be a diplomat as much as an officer. He foiled an assassination attempt on the Russian Czar and was influential in the ruler's decision to resist the French invasion of his vast country. He provided invaluable assistance in the defence of Riga against the French army, where he met Carl von Clausewitz.

He returned ill with typhus to England, yet soon after his recovery went off to deal with mutineers off the coast of France. After taking the mutinous ship by trickery, he sets up the return of the Bourbons to France, and was created a peer as Baron Hornblower, of Boxley in the County of Kent.

When Napoleon returned from exile at the start of the Hundred Days, Hornblower is staying at the estate of the Comte de Graçay. He lead a Royalist Guerrilla movement; after capture by the French, he was about to be shot under an earlier warrant for his execution when he was saved by news of Napoleon's defeat at the Battle of Waterloo.

After several years ashore, he was promoted to Admiral and appointed Commander-in-Chief of the West Indies. He foiled an attempt by veterans of Napoleon's Imperial Guard to free Napoleon from his captivity on Saint Helena, captured a slave ship, and encountered Simón Bolívar's army. He retired to Kent and eventually becomes Admiral of the Fleet.

His final fictional appearance is in the short story The Last Encounter. Set on his country estate Smallbridge, the elderly and long retired Hornblower reluctantly assists a seemingly-mad man claiming to be Napoleon, to travel to France. That person turned out to be Napoleon III, the nephew of Hornblower's great nemesis and the future president (and later emperor in his own right) of France. For his assistance, Lord Hornblower was created a Chevalier of the Legion of Honour. At the end of his long and heroic career, he was wealthy, famous, and contented; a loving and indulgent husband and father; and finally free of the insecurities and self-loathing that had driven him throughout his life. He died on the 12th of January 1857.

Horatio Hornblower was chiefly characterised by his courage and integrity. He regarded himself as defiant and resourceful. His introverted nature continually isolated him from the people around him, including his closest friend, William Bush, and his wives never fully understood him.

He suffered from severe seasickness (like Horatio Nelson) at the beginning of his voyages and played excellent whist; he was tone-deaf and found music an incomprehensible irritant. He was philosophically opposed to flogging and capital punishment, to the extent that on one occasion he contrived an escape for his personal steward who would otherwise have been hanged for striking a superior. 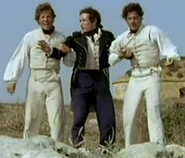 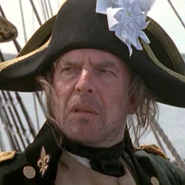 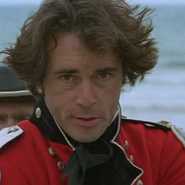 Cherie Lunghi as The Duchess of Wharfedale 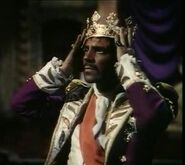 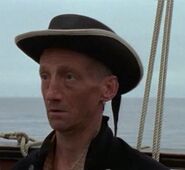 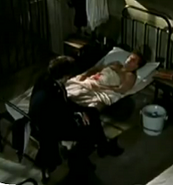 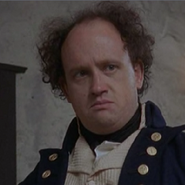 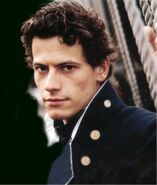 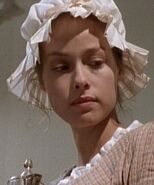 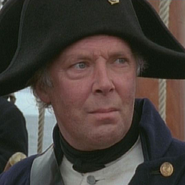 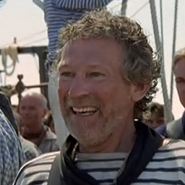 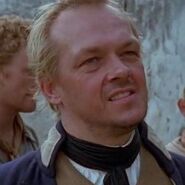 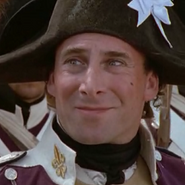 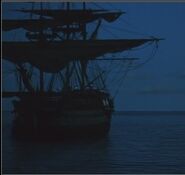 The Natividad and HMS Lydia

HMS Lydia fires on the Natividad

Papillon in the Hornblower TV series 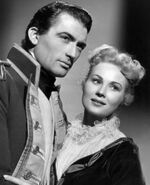